There was a time when if something got rusty there wasn't a lot you could do about. Rust on an object was considered the beginning of the end of whatever it appeared on. In some cases, oiling an object could slow the progress of the rust, but even that was no guarantee. 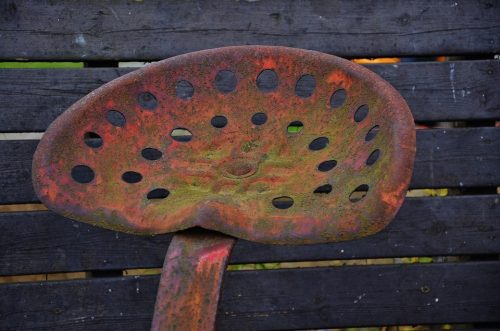 Fortunately, in the past few years, rust converters have been developed that can not only halt the progress of rust but in some cases can even make them more resistant to moisture and the resulting oxidation in the future. Rust converters have some serious disadvantages to their use, but regarding overall usefulness, these products have continually proved their value in their ability to save many products from further decay. This article is presented to give the reader the best information about best rust converters and their uses. 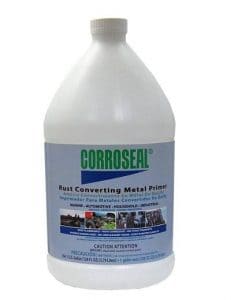 When it comes to the requirements of nearly all users, rust converters must be easy to use. Most products have proven their ability to do the job for which they were designed, but some are, quite frankly, easy or difficult to apply and use.

Such is not the case with Corroseal 82331 Water-Based Rust Converter, a one-step water-based product that is not only easy to use but also highly effective in its purpose. It also cleans up easily with just soap and water. You can apply it with a brush, a roller, or a sprayer.

You can also use that Rust Converter for practically any use, from marine, general household and automotive. A one-gallon bottle of this Rust Converter will cover from 200 to 250 square feet of surface. It was developed more than 25 years ago specifically for the marine environment, one of the toughest anywhere for its abuse of metals. It is also non-corrosive and non-flammable, so it's safe and effective wherever and whenever you plan to use it. It's one of the most popular rust converters on the market with an effective history of use in a wide variety of applications.

For many people, spray applications of practically any product are the easiest and the best way to use any product. It's for these people as well as those who want to prevent rust from forming that VHT SP229 Rust Convertor Can be created. It is probably one of the sample products to use since it sprays directly onto where you want it and leaves a clean, smooth finish where you apply it.

Further, it sprays on clear and turns to a black when applied on metal. After the product is dry, just sand it to the finish you desire. It can also be used on fiberglass or body filler. A day should be allowed after application before you apply a finishing coat. The space program can originally design VHT SP229 Rust Convertor, so you know that it is sure to hold fast to whatever it is sprayed on.

It is made to be used in conjunction with hot metals but can withstand virtually anything when it is applied correctly. It is perfect for use on your car's headers, turbo housing, exhaust systems, or anything else you expect to come into contact with heat. 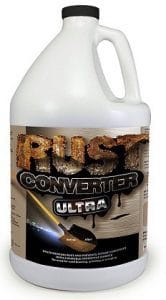 It is another rust converter product that applies in a liquid form and dries to a dark protective polymeric coating. Just as is the case with all rust converters, Rust Converter ULTRA, Highly Effective Professional Grade Rust Repair halts the growth of rust and prevents future rust and corrosion wherever it is applied.

You can apply this rust converter with a brush or sprayer, but you won't have to worry about any preparation such as sand blasting. It only takes about 20 minutes to dry.

This product should never be used when temperatures are high or low. Clean up can be done with ordinary soap and water. One gallon will normally cover about 500 square feet of area.

For ease of use, there are probably few topping the PlastiKote 624 Rust Converter. It is a liquid that is one of the easiest products of its type in the world to apply and use. It is organic so that it won't hurt the environment, but it does a great job of stopping rust on your metal, fiberglass, or acrylic surfaces, whatever it might be on. Regarding application, it won't bubble or smoke, which makes it easier to use. There are no harmful chemicals in PlastiKote 624 Rust Converter, and it's nonflammable.

And once you have it on a surface, it won't bleed through whatever you top it with, if you decide to do so. Whether you have a problem with rust on one of your surfaces, or you have another primer product on your surface that you want to cover with a rust converter. And the chances are good that whatever surface you use PlastiKote 624 Rust Converter on will be the last treatment you need.

This product is, just as the previous one, is liquid, which can have distinct advantages in the application as well as the way it looks when it is dry. Bing liquid it goes on smoothly and will dry into a surface that can be painted on easily. It not only neutralizes rust to create a metal surface, but it also results in a smooth surface that doesn't need to be primed before you paint it. Just apply it with a smooth brush or sprayer. One bottle of 3X:Chemistry 99022 Rust Converter covers more than 25 to 35 square feet of surface. It's also easy to use and clean up is a snap with just water and soap. And not only does it instantly convert rust to a polymer surface, but it also prevents future rust from whatever it is applied to. Leave it the way it is, or you can use this Rust Converter as a primer for another surface coat.

Rust-Oleum has built a long established business on the industry of protecting surfaces, so when it comes to rust converters. Since it is a spray product that is the only way of applying it, but it's worth pointing out that when it goes on it goes on well and smooth, whether you plan on using it as a final coat or just a primer.

But after you apply it dries to a flat black surface. The surface will be so flat, in fact, that there is little need for further treatment of any kind.

How to Choose the Best Rust Converter

When it comes to rust converters, it doesn't take long at a store before most people have their glazed eyes roll back into their heads with lost looks of dread at what they should choose. Frankly, there's a good reason for that. First of all, as easy as the job of a rust converter might seem, what it actually does it very advanced chemistry. As a result, rust converters are very complex solutions that are called upon to perform an important function. Further, depending on the product you choose, rust converters not only stop rust from getting worse on a given surface, but they can actually substitute for other products such as primers, which puts you ahead of the game on the job you are doing. You must, however, find the right product for your use. The points below will help you accomplish that.

Plainly stated, some rust converters are better than others.It his point you have to use a lot of experience and knowledge to pick the right product. If you simply don't know which product is best for your use, ask someone. Some people have a lot of experience with these products and can serve as a good house of information to you. Listen to them. The chances are that what you learn from them will serve as an excellent guide for you.

Another fact of life for rust converters is their ease of use. Again, simply stated, some products are easier to use than others. Everything else is the same. However, users should decide for themselves which type of product they prefer according to their experience and the requirements of the job they are doing.

Can Get to Hard to Reach Places:

This is another area where experience should dictate your choice of products. Some uses simply have places that are difficult to reach. As a result, users to decide for themselves what would work for them given a situation.

Just as is the case with any chemical, rust converters can cause chemical reactions during their use. Depending on the product as well as the surface it is being applied to, you should try to determine what the reaction will be. For example, some products will bubble and smoke when you use them on certain surfaces. It's for this reason that you should either get advice before using a product or at least test a given product on a sample of the surface before you start.

How a product coats a given surface is a major factor in selecting a rust converter. Some products simply leave a thicker coating than others. This is another instance of the need to determine the properties of a converter before you start so that you can select the product that is most appropriate for your use.

Rust converters can sell for a wide variety of prices. You should choose what is best for your budget.

You don't need to be a chemical wizard to understand most of what you need to know to pick out a best rust converter. A lot of it is just a matter of common sense. Fortunately, this article presents nearly all of the most important factors that you should consider when making a purchase. Once you understand what the different products will do and how your project will respond to them you should be well on your way to determining which is best for your use. The final result will be a project that you can be proud of for a long time.

Home | Contact | Privacy Policy | Disclaimer
ToolGuyReviews.com © 2020 is a participant in the Amazon Services LLC Associates Program, an affiliate advertising program designed to provide a means for us to earn fees by linking to Amazon.com and affiliated sites.
This site provides information based on the research and opinions of our contributors. Certain links direct you to affiliate sites which may pay a referral fee. Please see our Privacy and Disclosure pages for more information. Email: info@toolguyreviews.com